Leading Hymns from the Organ

by Ronald A. Nelson 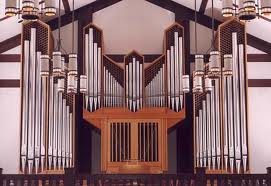 One of my biggest thrills this year has been being a part of the congregational singing in the sanctuary of Westwood Lutheran Church, St. Louis Park, MN, after a renovation was completed that not only preserved what were already excellent acoustics for music, but actually made them better. Coming back after a few weeks away, I basked in the sound and thought, "Yes, this is what worship should sound like!" (I was even compelled to write a fan letter to the man who had been our acoustical consultant!)

But not all of us are fortunate enough to have acoustics which will enhance and encourage singing, nor can acoustics ever be the whole answer. How can organists make the best of what we have? After experiencing congregational singing over the years from both the organ bench and the pew, I've come to a few conclusions. You may disagree with any of them, but here's what I've come to think:

1. Registration. I'll never forget the defeated feeling I had once years ago worshiping at a church music workshop in a beautiful university chapel. The organ was so aggressively loud for nearly all stanzas of the hymns that I could hear neither myself nor anyone else in the congregation. I finally decided, "Okay, let him do it" and gave up singing.

That was one extreme. The other, of course, would be not enough support to encourage the singers.

Having heard many different organs and organ registrations, I've come to the conclusion that the ideal registration for the congregation must have a certain kind of transparency that will be clearly heard, but not block out the voices with too much "thickness." A wide spectrum of pitch levels can be helpful if I don't pile on all the 8' stops I have. (That's the pitch I want from the congregation, so I'll save some room there for them.) Some instruments can do this much better than others. In most cases "pulling out all the stops" should be limited to the final stanza of a hymn of praise, after the singing has gone well in the previous stanzas.

Can I hear the congregation? Console placement, of course, has a lot to do with this, but in most cases it should be a litmus test. Experimenting with different combinations and listening with a critical ear is very helpful in finding what will be strong enough to support but not oppressive and stifling.

2. Breathing. Do I sing along? If I have a problem catching my breath between phrases, so will they. How can I deal with it?

The hymns most difficult in this respect are those with relentless quarter notes throughout, without any longer notes at the ends of phrases (for example, MELITA). In those cases too fast a tempo may make breathing between phrases nearly impossible. If I slow it down just a bit, I may be able to allow breaths without adding time and destroying the basic rhythm. My organ phrasing will also be important here. Can I allow just a trifle more space between phrases without stopping the flow?

A good breath between stanzas is also important. Paul Manz always advised making the pause an exact number of beats, so that the singers come to know what to expect and are ready to begin the next stanza. But part of that pause must be silence. Holding the final chord too long and then rushing forward without an ample break of silence will take them too much by surprise, and the first word of the following stanza will be lost.

3. Tempo. These days I'm wondering if tempi that are too fast have become more common than dragging. If in the congregation I have to concentrate on keeping up with the organist, how can I think about the text? Or, as organist, am I so anxious to "keep it alive" that I neglect other considerations? I ask myself, "What makes congregational singing exciting?" and one of my answers must be vowels. Too fast a tempo will minimize those vowels. Consonants are important, but they can never make singing truly soar. Reaching a climax on a longer vowel can really raise the roof of a sanctuary! So I must allow for and listen for those vowels, and still keep the pace alive. At a recent hymn festival led by Michael Burkhardt every tempo felt "just right." We never had to think about tempo. We could just enjoy singing every hymn at the most comfortable pace, and concentrate on the words.

4. Phrasing. Have you ever heard—over a period of time—two organists play similar hymns with exactly the same registration and exactly the same tempo, becoming excited by one but left cold by the other, and scratched your head to figure out what was the difference? A long time ago one clinician whose name I can't recall told of how he phrased his hymns—with a slight, imperceptible accelerando in the middle of each phrase, then coming back to starting tempo.

Am I thinking about the words as I play? At Burkhardt's festival it was clear that every word was important to him, and reflected in his playing. (Is that the "difference" mentioned above?)

Another helpful consideration in phrasing is deciding what is the main pulse. For many hymns in common meter, I find it much easier to keep the flow if I regard the half note as basic rather than the quarter. That doesn't always mean a faster tempo, just a better feeling of forward movement.

5. Articulation. How do I find the balance between "choppy" and obsessive legato that doesn't give them enough rhythmic definition? This can vary according to the needs of the moment as well as the acoustics of the space. If they are dragging, then a more detached style will help. On the other hand, if they are with me all the way, I am free to play in a manner best expressing the text.

6. Alternate harmonizations? Yes and no. The practice of saving that alternate for the final stanza may depend on how "different" it is, since we want to leave the congregation "feeling good" about the hymn. Some people have been really irritated by harmonizations that just "don't sound right!" On the other hand, an alternate setting of a middle stanza that is obviously in tune with the text for that part of the hymn can add meaning to the words. Above all, I must be sensitive to my congregation and what these settings do or don't do for them.

7. Descants? Also yes and no. I'll always remember the confusion of a friend in my congregation when a loud trumpet played a descant which caused her to completely lose the melody. After that I limited such descants to the choir sopranos and made sure that the organ and the rest of the choir gave full support to the tune.

What makes a good descant? Having lived with all kinds, I've come to the conclusion that those with fewer words and longer vowel sounds are best able to be heard and "soar" over the melody. Faster words and notes don't allow as much a chance to do that. Some descants may best be sung on a single open vowel, with no words at all. The acid test: does this descant inspire the congregation to sing out even more?

In conclusion, there is no "one size fits all" formula for leading congregational singing from the organ. But constant sensitivity to what is happening with each effort will enable our great treasury of hymnody to remain alive and well.

Written by Ronald A. Nelson

With degrees from St. Olaf College and the University of Wisconsin - Madison, Ronald A. Nelson served for 37 years as Director of Music at Westwood Lutheran Church in suburban Minneapolis, where he has been named Cantor Emeritus and now serves as a choir member. In 1999 he was one of 50 composers chosen to write music for the "Continental Harmony" project of the American Composers Forum and National Endowment for the Arts to celebrate the new millennium. He is the recipient of a Distinguished Alumnus Award from St. Olaf College, the F. Melius Christiansen Award from the Minnesota ACDA, and the Faithful Servant Award from the Association of Lutheran Church Musicians.

Prelude Music Planner is the web-based tool that provides a wealth of music, thoughtful commentary, and time-saving tools for the church musician.
Copyright 2022 | Designed with by Augsburg Fortress